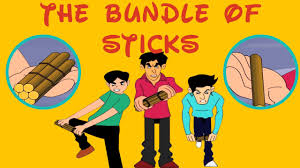 Three Sons and a Bundle of Sticks-work together (Small story)

Once upon a time, an old man lived with his three sons in a village. The three sons were hard workers. Still, they quarreled all the time. The old man tried a lot to unite them but he failed. Though the villagers appreciated their hard work and efforts, they made fun of them on their fights.

Months passed by and the old man fell sick. He told his sons to stay united, but they didn’t listen to him. So, he decided to teach them a practical lesson so that they would forget their differences and stay united.

The old man called his sons. He told them, “I will give you a bundle of sticks. Separate each stick and you will have to break each stick into two. The one who breaks the sticks quickly will be rewarded more.” The sons agreed.

The old man gave a bundle of 10 sticks to each of them and asked them to break each stick into pieces. They broke the sticks into pieces in minutes. And again they started to quarrel among themselves as to who came first.

Managing Stress in the Workplace: How to Get Rid of Stress at Work and Live a Longer Life: Volume 1 (Stress Management How to Deal With Office Stress)

The old man said, “Dear sons, the game is not over. Now I will give another bundle of sticks to each of you. You will have to break the sticks as a bundle, not as separate sticks.”

The sons agreed and tried to break the bundle of sticks. Though they tried their best, they could not break the bundle. They failed to complete the task. The three sons reported their failure to their father.

The old man replied, “Dear sons, See! You could easily break the single sticks into pieces, but you were not able to break the bundle! So if you stay united, nobody can do any harm to you. If you quarrel every time with your brothers, anyone can easily defeat you. I request you to stay united.”

The three sons understood the power of unity and promised their father that whatever be the situation, they would all stay together.

Moral of the Story: When it comes to solving problems, it’s much easier to work together as a group rather than spend all that time bickering. This goes especially for projects that are nearing their deadlines. It’s important to focus on the task and help each other overcome roadblocks rather than argue.