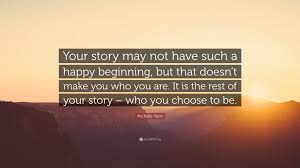 Story – This Is Why You May Not Be Happy

By inspirelife:Attitude Is Everything on 3rd Feb 2021 • ( Leave a comment )
Advertisements

At one point a group of 50 people were attending a conference. Soon the speaker stopped and began to give each one a balloon. Each one was asked to write his name on it using a marker pen. After that all the balloons were collected and put in another room.

The guests were now ushered into the room and asked to receive a balloon inscribed with its names, within five minutes. Everyone was furious, demanding his name, crashing into each other, and pushing others away.

At the end of 5 minutes no one could find his balloon.

Now each was asked to randomly collect the balloon and give it to the person named.
Within minutes everyone was in his own balloon.

The speaker began — Surely this is happening in our lives. Everyone scrambles for happiness all around, not knowing where it is.